Stay up to date on our ongoing repair and affordable home building efforts in DeKalb County.

Recently 40 volunteers from Cushman Wakefield and the African American Network of Commercial Real Estates Agents helped us clear land on the lot where we will build our first home for 2022. A few dozen hedge trimmer sessions later, we have a lot that we are ready to build on! We expect to start this home build in October. One of our bigger repair projects, is for Mr. John, an 82 year young Army Veteran. He was born in Memphis, Tennessee, and served the Army from July 1962 – July 1965 with the 82nd Airborne in Ft. Bragg. He worked with heavy artillery equipment and served as a Paratrooper completing 30 jumps during the day and 5 jumps at night, which is making it harder to walk now. He has three grown children and is a full-time caregiver to his wife who currently suffers from dementia and Alzheimers.

Mr. John was present for Dr. Martin Luther King’s “I Have a Dream” speech, and he was one block away from the Lorraine Motel where Dr. King was shot at the time. Mr. John also, among other jobs, was once singer Isaac Hayes’ limo driver.

We’ve been assisting Mr. John in replacing his roof and adding gutters and gutter guards. Our next focus is the bathroom that is falling through the subfloor. Mr. John has tin foil and scouring pads stuck between an open space between the tub and subfloor to stop the rodents from coming in.

We also hope to assist him with his older HVAC system that needs to be replaced as well as with removal of a tree that is encroaching on the home. We are so happy that we’re able to help him and will spend the next two months or so completing these repairs. Ms. Gloria is 86 years young and has been in her home for 48 years. She is a native Atlantan and is a member of Alpha Kappa Alpha Sorority. She shares her home with her 70 year young cousin.

We’ve been able to help Ms. Gloria with replacing gutters and gutter guards, doing lots of electrical work, replacing air vent returns, and removing and replacing two vanity sinks and fixtures. Many age-in-place modifications such as railings have been made and installed. Next on the list is to replace a leaking roof and a leaking electric water heater. Mr. Edward is a 77-year young Marine Corps Veteran. As a young man, his family relocated to Norfolk, Virginia. He is part of the "Norfolk 17", the first class of high school students to integrate the Norfolk, VA school system in 1959. He served during the Vietnam era as a Logistics Supply Clerk and received a rifle marksman badge during his service in Honolulu, Hawaii. After four years of service, he was retired as a disabled veteran.

He worked at Westinghouse, Honeywell, and then retired from Coca-Cola. He has seven children, nineteen grandchildren and one great grandchild.

For Mr. Edward’s home, we have been making age-in-place safety modifications and also painting, repairing flooring, removing and replacing deteriorating kitchen sections, weatherizing, repairing roofing and repairing the HVAC system. We are so happy to be serving Mr. Jordan to make sure his home is safe and secure for years to come. 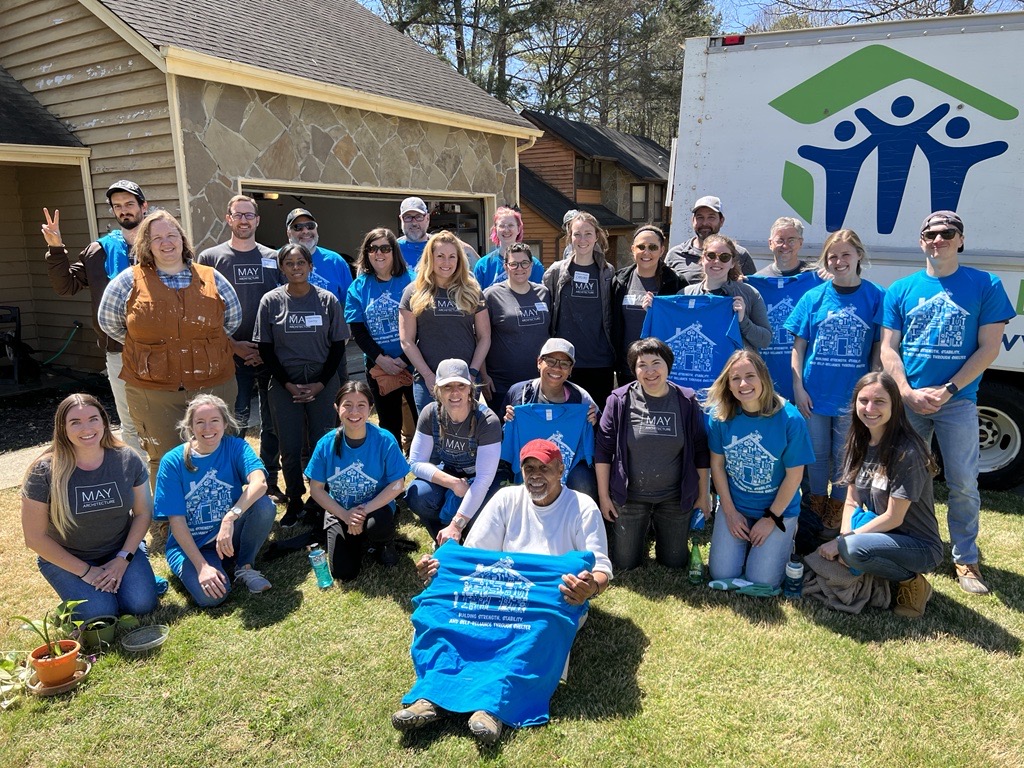 Habitat for Humanity DeKalb’s Playhouse Program is a unique volunteer opportunity that gives groups and individuals a meaningful, creative, and hands-on day of building playhouses that are then donated to local children. The funds raised through the Playhouse Program support Habitat’s mission of building homes, communities and hope.

Recently volunteers from Atlanta’s Lighthouse Alliance gathered to build, theme and paint a playhouse that was then donated and ‘revealed’ to one very happy 3 year old little boy, Savion.

Click here to learn more about our Playhouse Fundraiser Program. We’d like to thank our Owens Corning partner for their Roof Deployment Project that has enabled us to provide roofs to several of our veteran home repair recipients and continues to allow us to help families build strength, stability and self-reliance through shelter.

Are you a veteran in need of home repair? Click here to see if you qualify.

Are you a senior in need of home repair? Click here to see if you qualify.